Cleveland sports are often associated with misery, gloominess, loss, and a general feeling of depression. Why is it that everytime we picture Cleveland sports, there’s always a cloudy sky? Even though the Cavaliers play inside at Quicken Loans Arena, isn’t it still somehow god damn cloudy?

Brown’s fans are rejoicing for their first win in 20 games. You’d think the Brown’s won a lottery that they all chipped in for so they could buy decent players.If any other fan’s talked the way Brown’s fan’s are, people would be squashing their happiness with shit-talk. Internet trolls work fast.

However, this isn’t happening withe Browns. And If you express how you think Brown’s fans are over-celebrating and over-estimating how big of a feat their first win is to  any football fan, they’ll respond with, “Oh come on. They’ve had such bad luck for so long– they deserve it.” They deserve it? Why? For being disloyal to their team? Just because you root for a team that’s been brutally mismanaged by its owners for years doesn’t entitle you to jack shit. Cry about it. 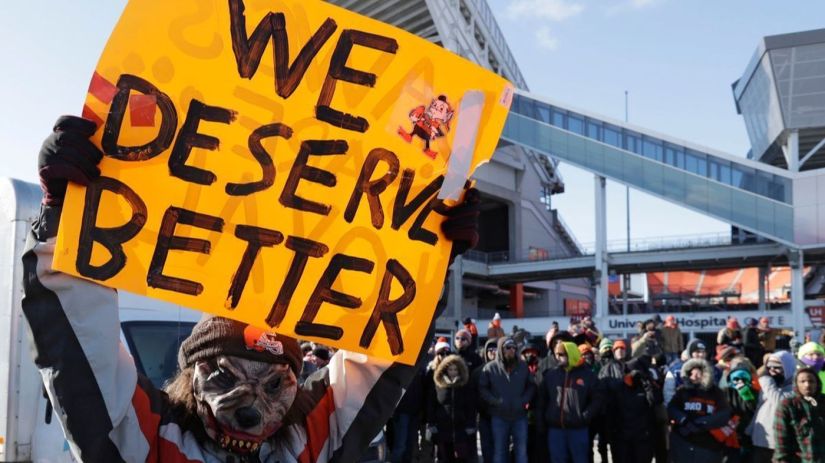 First of all, with the way Brown’s fan’s are celebrating their win, you’d think the Son of God reincarnated himself to return as the Brown’s starting quarterback, while Satan and his demons ran the defense.

The party is underway in downtown Cleveland. The Bud Light fridges are open and fans are celebrating a Browns win for the first time since December of 2016! @wkyc @WKYCSports pic.twitter.com/5MfJXAxQiV

Ok relax dog pound. One single game was won. One. Against the Jets. I know that there can sometimes be “get over the hump” effect where it might feel really hard to get that first win, and once that win comes the W’s start rolling, but get realistic. It’s been one win. You know who else has 1 win in the NFL’s opening 3-weeks? The Jets. Boom. Need I say more?

The Brown’s getting their first W against the Jet’s is like losing your virginity to a hired hooker. Yes, you technically got what you wanted, but do you really want that to be your first? 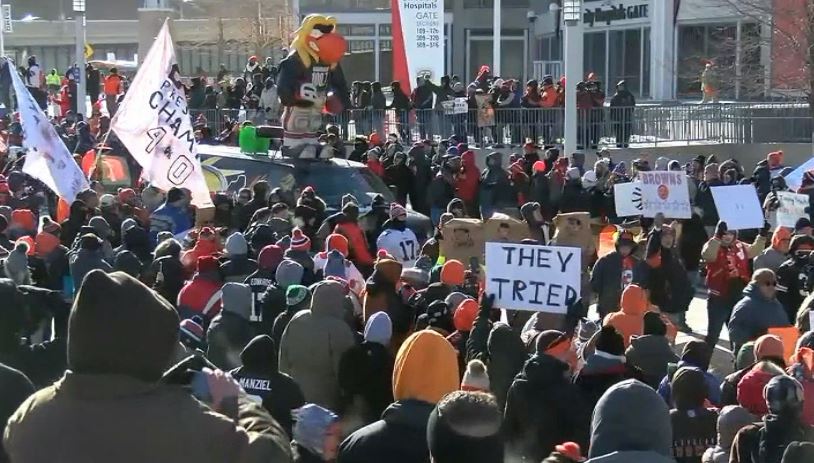 This is something that a fanbase of opposing team’s do. I think the eagles did something like this during for their opponents in Minnesota during the playoffs last year.

Why would the player’s even want to win for fans that are so disrespectful to them?

After all this, the Brown’s organization recognized that their fan-base has sort of given up on hoping for win’s. The fan’s stop rooting for their team, and game attendance declined.

The Brown’s organization had to incentivize their fans to come to their games, get fans rooting for the Brown’s again. The Cleveland Brown’s now have their famous “beer-prize.” Everytime Cleveland gets a win, bud light fridges all over the CITY open up and free beer is given to the fans. Literally the city is supplied with beer for a giant party.

Loyal fans would agree with me that nothing keeps you from rooting for your team. Additionally, loyal fans would never not go to a game just because their team sucks. Even if they are so bad that it’ almost a guaranteed loss, loyal fans go to the game no matter what–even if the game doesn’t even matter in the long run. Brown’s fans were disloyal and abandoned ship, only to come back when the organization literally begged the fans to root for them again by promising free beer with every win. No matter how much a team may struggle, you’ll never see a team from the NFC East beg their fans to attend with free beer. Thick and thin.

Football stadiums stop serving alcohol early in the 3rd quarter to help ensure that no one can buy alcohol too close to possibly operating a car. I guess Cleveland promotes drunk  driving:

Oh, here’s another thing: CLEVELAND SPORTS ARE GOOD. We just think they suck because the brown’s spread their Brown loser-spray all over the Cavalier’s and Indians. The loser Brown’s lump all of Cleveland’s teams together and label the city as losers. But in recent years, the Cavs and Indians have been really fucking good (not for long though Cavs…LeBye James).

The Brown’s are like a blackhole. Blackholes have a gravitational pull so strong that light cannot escape from it. The Brown’s have the same effect on all of Cleveland’s sports…their near winless seasons each year cause a darkness of losing with a pull so strong that Wins cannot escape the gravity of something like a repugnant Brown 0-16 season. We call this the Brown-Hole (sometimes it’s sort of pinkish for people with fairer skin).

The Cavs literally just won an NBA title in 2016 and have gone to the NBA finals the last 4 seasons (every year since 2014).The Cleveland Indians went to the World Series two seasons ago in 2016, and went to the ALDS last year. If you have three major sports teams in your city, and two of them go to the playoffs and finals every season–one of which just won a finals title–your city is one of the winnin-gest cities of major sports in the country.

Quit your whining, Cleveland. No other city throws temper tantrums every time their team goes through a drought of sucking.

The Chicago Cubs didn’t win a World Series until they smacked the Indians in 2016. I wonder…if they lost, would Chicago parade for their World Series drought? Or boycott games because, hey, what’s the point? They won’t win the World Series anyway. Guess we’ll never know because the Mistake on the Lake screwed the pooch with that one.

Stop babying Brown’s fans. They love their “woe is me” identity they’ve created for themselves so you feel bad for them. Yet, the reality is, many cities have it worse. Leave the weak behind. Put Brown’s fans in the dirt. Flush them down the toilet where they belong (If it’s brown, flush it down).

Can you imagine being a Phoenix/Arizona sports fan and rooting for these brutally dismal teams?

GET UP OUT THE DESERT IF YOU CAN’T TAKE THE HEAT.